We recently witnessed the wind-driven Tubbs fire blast its way through densely urbanized neighborhoods in Northern California, causing dozens of fatalities and thousands of home losses. This tragic event easily ranks as the most catastrophic fire in modern California history. Stories of how fast the fire spread and how little time people had to evacuate are stunning.

Despite how unusual the devastation appears, we need to recognize that these structure-to-structure “urban conflagrations” have happened in the past and will happen again. Yet these fires revealed that we have key gaps in our policy and planning related to assessing risk in fire-prone environments.

What is increasingly clear to fire researchers like me is that losses on the human side are often driven by where and how we build our communities. This means we must learn to coexist with fire, if we are going to inhabit fire-prone landscapes, just as we adapt to other natural hazards. An essential step is to shift our perspective from a focus on hazard to one that more comprehensively includes human vulnerabilities.

California is leading the way in mapping the danger that wildfires pose to human communities and, in particular, linking building codes to fire severities that may be expected in given location. The state’s Fire Hazard Severity Zone maps are an essential step in recognizing fire as an inevitable process that must be accommodated, similar to how we plan for floods, landslides, earthquakes and hurricanes.

What is missing from these maps, however, is extreme weather patterns. The Santa Ana winds of Southern California are a notable example. Strong, hot and dry wind episodes are associated with nearly all of our largest and most destructive wildfires, including the 1964 Hanley fire in Northern California that burned an almost identical footprint to the Tubbs fire, yet relatively little is currently known about how often they occur across a landscape. 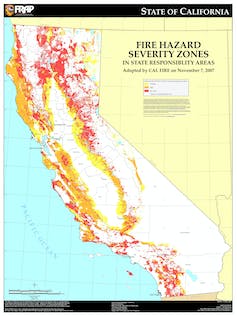 New methods are becoming available for mapping and modeling winds, and future versions of the Fire Hazard Severity Zone maps will therefore include such weather conditions. Similar maps are also needed for fire-prone areas outside California.

Despite technical advances, a key problem with most mapped approaches to fire danger is that the focus is almost exclusively on characterizing the hazard – flame lengths, rates of spread or fire intensities of an oncoming wildfire – and much less on the vulnerabilities of what is actually exposed. The “wildland-urban interface,” where developed lands are exposed to natural, flammable areas, is thus often mapped and assumed to be where the exposure ends.

Clearly this is not always the case. Analogous to when a levee fails, after a wildfire manages to ignite homes along the wildland-urban interface, many homes farther inside the neighborhood can quickly become exposed.

Depending on the building codes in place during their construction, these newly exposed structures may or may not be very fire-resistant. Their vulnerability to ignition can also be especially high if they are spaced closely together and the winds are strong, because that is when fire spread transitions to a structure-to-structure domino effect.

Better fire risk mapping means we should be able refine our notion and approach to assessing vulnerability.

There are numerous reports of how difficult and deadly it was to evacuate during the Tubbs fire. Apparently many people had almost no warning at all. This highlights the importance of both evacuation planning and evacuation communication systems, as getting out in time is what Americans tend to rely on in wildfire situations.

Although evacuation preparedness is nearly always mentioned in Community Wildfire Protection Plans and standard guidance for home owners, the overriding message is typically to “leave early” whenever possible.

While absolutely correct, this advice minimizes the importance of pre-fire evacuation planning and the short time there may be to get out. It takes quite a bit of thought and effort to anticipate being in such a crisis situation! 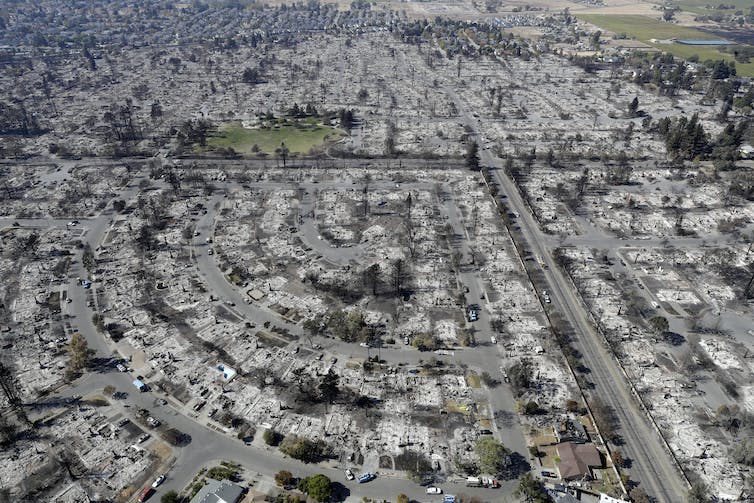 An urban fire that gave many people little time to leave points to the need for better planning on evacuation. AP Photo/Marcio Jose Sanchez, CC BY

What should one take, and where might one actually go?

On short notice, how does one account for pets, children or the elderly?

Is there a place one should retreat to, if evacuation orders are received too late or not at all?

This last question may be the one that gets the least attention, and the many fatalities in the Tubbs fire suggest that it requires much deeper consideration. Firefighters are often given specific training about what to do with limited evacuation options. For homeowners, however, guidance can be sparse.

When it is too late and too dangerous to evacuate safely, fallback options must be considered and communicated ahead of time. In an urban conflagration situation, local details dictate whether “safety zones” actually exist as places to take refuge. Given the real potential for such disasters, many communities should consider identifying (or building) key “hardened” structures to act as local-scale refuges.

Reducing human exposure involves more attention to what people must do during a wildfire, or even the rare urban conflagration. Safe evacuation deserves as much emphasis as reduction of fuels, such as creating defensible space around homes or larger scale fuel breaks by thinning vegetation around communities.

From the scale of individual home construction up to the location and arrangement of development on a landscape, our communities should be better able to survive the natural hazards that occur there. This requires both short- and long-term strategies for achieving a safer built environment.

As a starting point, we must acknowledge that we currently have tens of thousands – possibly even hundreds of thousands – of homes constructed according to building codes that leave these structures vulnerable to ignition. Amazingly, however, there are very few examples of grant programs to mitigate such vulnerabilities through retrofit programs to, for instance, replace wood shake shingle roofs or to upgrade attic and crawlspace vents to block embers from entering homes.

In contrast, there are millions of dollars in public funds spent annually on community-scale fuel reduction projects. These are common activities pursued by Fire Safe Councils in California and similar organizations in other states.

The same level of support should be available for mitigation of fire-related structure vulnerabilities as there is for hazards.

Over the long term, land use planning is probably the most effective tool available for creating safer communities. We must be more deliberate about how we develop on fire-prone landscapes, taking advantage of emerging hazard-mapping techniques.

The goal here is not necessarily to build fewer homes, but to design and site developments that avoid the highest hazard regions and concentrate development in the lowest hazard areas. This logic applies, to varying degrees, to constraining development with respect to other natural hazards.

Despite an aversion by some to land use planning, this strategy is simply common sense. It will also save lives and massive amounts of public resources over the long term.

Where we do choose to develop and inhabit hazard-prone environments, it may be necessary to design communities with “passive survivability” in mind, or the ability to withstand the event and have water and power for a few days. This provides both the built environment and the people within some basic protection for a limited time.

Strategies exist to lower the risk of fire in the current housing stock and to more carefully design and site future development where wildfires are possible. With increasing extremes expected as climate continues to change, officially recognizing this link and creating a safer built environment will only become more urgent.

Amazingly, just weeks after the Tubbs Fire in northern California, another record-breaking event occurred in southern California: the massive Thomas Fire. Driven by both Santa Ana winds in Ventura County and sundowner winds in Santa Barbara County, the Thomas fire eventually became the largest wildfire in modern California history (over 280K acres burned and ~1000 structures lost). Before the Thomas Fire was even out, heavy rains then triggered devastating debris flows in the picturesque town of Montecito; hundreds more had their homes destroyed or damaged, and at least 20 people died. People are still digging out as I write this.

Despite the dominant role of extreme winds, many have pointed to climate change as being partly responsible for this year’s anomalous fires. However, “attribution” to anthropogenic greenhouse gas (GHG) emissions is a challenging issue. Although much of California had roughly average or higher rainfall last year, the preceding 5 years of epic drought — likely much worse due to GHG-caused higher temperatures — could have had a lingering effect on fire behavior and growth (e.g., due to dieback held in plant canopies). Unusually high temperatures during this fire season could also be linked to climate change. Not having any rain all the way into January is unusual for California, and such precipitation variability is also potentially linked to GHG effects (i.e., more extreme droughts and wet periods).

The late timing of the Thomas Fire may have allowed for a more successful response, given that resources across California could be concentrated on this particular event. Regardless, the fire activity experienced this year has stunned us all, and there is great hope now for progressive legislation to reduce impacts in the future (e.g., better hazard mapping, smarter land use planning).

Max Moritz is a Cooperative Extension Specialist, Wildland Fire, with the University of California, Berkeley.

NOTE: The “Update (February 8 2018)” is an addition to an article originally published in The Conversation (US Edition) on October 23, 2017, titled “California needs to rethink urban fire risk after wine country tragedies. Read the original article at https://theconversation.com/california-needs-to-rethink-urban-fire-risk-after-wine-country-tragedy-85966.